I was due to write another mini-article on some DCS weaponry so today we shall focus on one of my favorites, Anti-Aircraft weapons. Specifically we shall look at the majority of the AAA and SPAAGs (Self propelled anti-aircraft guns) that DCS has to offer.

There won’t be coverage of the “flak” style of AAA, from the German 88mm and the British QF 3.7″ guns as the flak in DCS is currently quite oddly behaved. I tend to get a vertical “wall” of flak on the first aircraft to be in range which doesn’t translate to good use of ammo. Imagine holding your arm out in front of you, shaping your hand like a paddle and vertically slicing the air in front of you. That is what the flak guns do for lower altitude threats, rather than creating a blanket of fire, which they do OK at with formations of B-17s higher up. But I digress…

I will not be diving in deep in to details about these units, much of the stats are available on Wikipedia if you want to get more information about the guns or shells that they fire. However, I will discuss a few points that I believe matter in DCS.

One: Rate of Fire

The number one factor in determining a successful AAA gun, especially in DCS, is to have a high rate of fire. This allows the AI/user to “walk” the gunfire through the target. This follows in aircraft guns as well, with almost all fighters coming with reasonably high rate of fire cannons, even those that are not using the rotary Gatling style guns. There is also the fact that more rounds in the air = more chances to hit.

The number of rounds before interrupting fire to reload is key. With a high ROF, a small magazine size as seen with the German 20mm guns can be quite the handycap. This doubly compounds against slower firing guns such as the M1 37mm and the Bofors 40mm guns as not only do they have far fewer rounds in the air, they also have to keep pausing every few rounds to reload.

A gun that is out of ammo, is out of the fight. Simple as that. In these tests both the M163 Vulcans and the Bofors 40mm guns ran out of ammo – and these weapons have wildly different ROF.

The larger caliber of guns cause more significant damage in DCS, which is important versus AI. The AI can continue to fly when missing one or more various parts such as: horizontal and vertical stabilizers, elevators, rudder and ailerons. While a mountain of .50 cal fire may ruin a player’s day, the AI is usually fine to keep fighting until they are on fire or lose the entire tail or half a wing. The larger 30mm ammunition of the SA-19 and 35mm of the Gepard can cause lethal damage to an AI airframe with only a few rounds and therefore almost sweep the scoreboard.

Range is lower down the list, partly for good reason. The ranges of these guns all vary however the effectiveness of larger ranged guns matches with their increased ROF (Gepard & SA-19), or lack thereof (37mm & 40mm). Range increases with caliber – which doesn’t really need to be mentioned. A larger benefit to range is a reduced chance of losses, rather than directly achieving more kills.

Single units in DCS can easily be defeated by exploiting their weaknesses. While my test structure, to follow below is quite crude, biased and even unfair in terms of providing each gun system it’s ideal setup; the idea was to provide uniformity in setup to eliminate that specific variable. However, in the case of all guns involved they all significantly benefit from being part of a battery. Even two guns can vastly do better than a single gun. One of the best examples of why AAA of all sizes has to be used en masse is to look at old WWII footage from the Pacific, especially when dealing with Kamikaze. Flying straight at the guns is about as easy a target as you are going to get and even then they are hard to hit!

My test is pretty simple, and they are all clones of the one original test I did to show how terrible the M163 Vulcan “VADS” is. We have 12 BF109’s flying in from outside the range of the AAA units at the default 6562 feet, carrying a SC250 (250kg) bomb. The choice of WWII plane was because they are relatively slow, and easy targets – if the AAA can’t hit these, then there is little point testing jets. The 109 specifically would follow it’s programmed task well, dropping it’s bomb on target like it was laser guided and then proceeding to strafe with 30mm and 13mm gunfire. Twelve aircraft means that the AAA guns will be busy – they can’t converge on a single target and survive. These aircraft are aiming to destroy a total of forty AAA weapons, one type per mission file. This ratio proved reasonably ideal as more aircraft lead to decimation of the AAA forces. Fewer aircraft don’t present much challenge to the AAA.

In the case of the SA-19 the mission includes an invulnerable Huey flying outside their gun range to cause them to waste their missiles. Use the F10 radio command to despawn it when they are done, so that the SA-19s can focus their guns on the 109s.

Vehicle based units are set to not disperse under fire, so that it is fair against the stationary units. If the 109’s are bombing in quick succession, allowing them to move drastically improves the survival rate. All ground units are given ROE = Weapons Free and State = Red with an Expert AI. The aircraft AI is at Veteran. 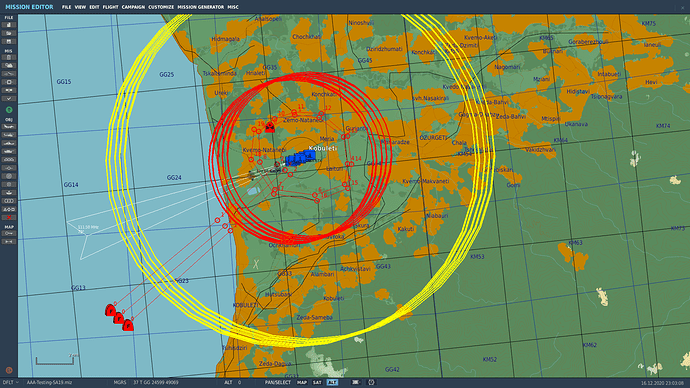 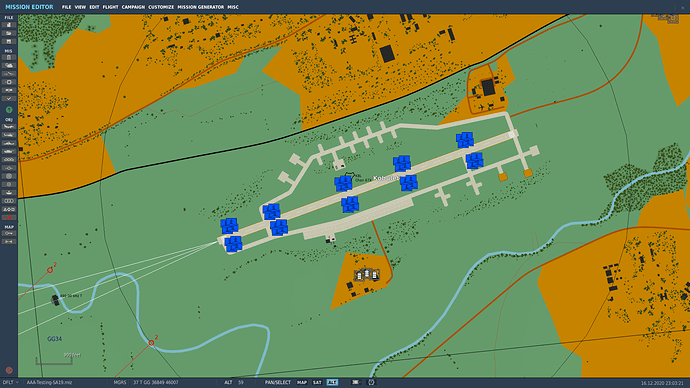 The following results were recorded from a single test of each mission. The table is sorted by least units lost, then most units killed/damaged.

Another point with the Vulcan 20mm is that we have a big issue of inconsistency with these in the game. The F-16C and F/A-18C have different ballistics with the same gun, by the same developer which I have reported in a thread at the ED forums – the same slant range cue in the same conditions yields different landing areas during a strafe. This may be due to them using different shell types, but being from the same rough era that shouldn’t be so. The F-14’s version is like a laser rifle by comparison, even after the two ED jets got a dispersion fix. The F-15C I am unsure of. The M163 seems to still have the older wide dispersion, which may be correct for AAA usage. The M163 also lacks a reticle for the base optical aiming in CA, meaning even with a lock you can’t really “aim”. There is a reticle for the zoom view.

Included below is a “User Test” version of the mission with one of each unit, the group on hold fire so you can compare side by side and fiddle a bit.

While far from scientific, the tests completed my original goal of identifying a better unit for modern missions for blue force. We had been running missions with US units having M163 VADS for close in support, only to find they rarely ever shot and were typically picked off by helicopters. The Red side has much better selection of weapons. From a practical standpoint to get the desired effect in game it makes more sense to break pattern of a US-only blue force and use Gepard, than to stick with the VADS. Once the initial runs had been done, with closer to equal aircraft to AAA, testing all the various guns was just for fun and ended up highlighting issues we had been starting to see with other units – such as the recent improvement to ZU-23, and the hesitant ZSU-23-4. I did not test the open ZU-23 as I reason it is close enough to the closed unit. The ZU-23 on Ural-375 I did not test as it does not have a uniform field of fire, with the truck cab blocking some of it.

More specific testing, and data comparison I reason is good for follow-up discussion on this post!

P.S: If you really want to defend something, use some SAMs as well!

Falling in love. A person has a feeling of euphoria from a relationship with another individual. People who are in love do not notice the vices and shortcomings of their partner, exaggerate their merits and achievements. The period lasts until the arrangement of a joint life or until the first serious quarrel. Satiation https://rufreechats.com/sexy-video-chat.html. At this stage in the development of relationships, lovers begin to assess their partner more soberly, wonder about the need for the relationship they have begun, and seek to spend time without their beloved.